Last Sunday (August 4th) we had our latest race. It was a race that we signed up for before Ironman Texas so it was a race that even though we wanted to do to some extent turned out to be a bit of a drag. To start like we’ve been talking for the last few entries we haven’t really found that motivation to get back into the groove of training with the same intensity we were before. Additionally, our work schedules have been crazy busy with traveling on both sides. To the point that for instance this time the one traveling pre-race was Res and going to Denver on an all week work training wasn’t the most inducing environment to train and returning Friday to leave on Saturday morning to race on Sunday was a bit exhausting. To all that add a couple of weeks of above 100–degree weather in Texas and really makes things difficult. Yes we started using the “it’s too hot” excuse. Oh well, we think we deserve it after training all winter for IMTX.

We don’t really have any major races scheduled… Oh wait. Lets take that back, we don’t have any long distance races scheduled. I guess an Olympic Tri (trifecta Tri), Bourbon Chase and Dallas Marathon sound so short after a 15:00 hr day. Needless to say we feel like our bodies still have some endurance left despite the few pounds we packed since May 18th. Maybe not…. We know that.
We went to Rivercities Tri pretty much just wanting to do it just to do it. Maybe with the goal of not coming back with worse times than last year and maybe getting a PR, other than that the usual have fun and try to do our best.
The day came, Saturday our drive east to Shreveport was easy. We convince K to do the drive so Puli was actually happy to not be the driver as normally happens. It’s always fun to go to this race as the swag is pretty good. Better than most. For some reason it is one of the top 5 tris with the best swag.

Our day started at the typical 5:00 alarm, get ready have a little breakfast. Packed the bikes and bags and headed to the lake. It is a beach start so it is always fun to have those. Puli was in the 3rd wave and Res was a couple of waves after. So off we went. The swim was pretty good for both of us, both of us lowered our times on it which was a good start. Our bike splits were good. Puli’s was 0.1 mph faster than last year and he felt pretty strong the whole way to the point he was worried that he was going too fast and wanted to have legs left so he pushed back. Res’ bike while not faster than last year was strong, consistent, and really the progress has been seen on it. Our run was when the wheels fell off. Puli was feeling good and started ok, but the heat took a toll on him and he couldn’t get his HR down or stay cool. Res’ run was great 2:00′ PR over last years run which was amazing. Our transitions suffered a little as the racks were weird and the bikes were hard to get in and out. So in recap Puli didn’t PR by less than a minute which he wil take and Res PR by over 2 minutes which she was excited about.

In summary we decided that we definitely need to get back in the groove of things. Can’t imagine if we had stuck to the training plan we have on our schedules which is focused on short races and building that speed that we need especially getting off the bike or on the swims.
We also felt like we had lost respect of the distance to some extent. Our sprint or olympic nutrition/hydration is not as well thought out as our long distance ones. Is like we feel we don’t need it. We needed it last weekend. We ran out of Infinit on the bike as it was so hot and humid. So starting the run with that in your mind that your are already digging up your reserves is not the greatest feeling.

We will do a short 5k in Belmar, NJ this weekend. The Belmar Chase, supposed to be pretty flat and fast we will see how the Jersey shore treats us. In the meantime we will definitely start our training discipline back on Monday when we get back home. We have a month to tweak a few things before Trifecta as we definitely want to PR this one. We have about 15 or so teammates doing it as well.

Then after that we plan to take a triathlon hiatus and focus on our Bourbon Chase and Dallas Marathon to close out the year. We want to focus on the runs as it seems to be our weakest leg and also the one that we’ve lost the most on after IMTX.
We’ll hope to share the experience after Belmar’s 5K. We want to keep the tradition of doing a race when we go to NJ, it might not be a podium like last years but we will keep the tradition alive.

March 10th was the official start of our 2013 season, the journey we started a year ago and who would’ve imagine we would be so hooked from the beginning. It has been a year of ups and downs, happy times, sad times, crashes, run overs (see blog Pain over Body), but more than anything it has been a year where we have grown both as individuals and as a couple.

As individuals we have been able to push our bodies to limits we never imagined possible and we feel a lot healthier. As a couple we have grown stronger, and more the anything we have been able to share this journey together, neither one of us can imagine doing this without the other.

Anyways, we started our season. Last year we attempted to register for this same Tri as it is next to the house but by the time we decided it was sold out. We were happy we didn’t do it as Puli had IT issues and on race day it was raining and to the point they cut the bike to half the distance, so being the first one wouldn’t have been a good idea. Today wasn’t any different, the weather was kind of crappy, and big storms rolled in late at night, all the forecasts pointed that no storms were going to be present in the morning, but…. by the time we woke up at 5 am some left over storm had just rolled in. Rain was coming hard and we were getting ready. Puli was worried because he had wiped out on a wet road ride a few months ago. So the idea of riding on wet roads wasn’t too appealing. We pushed and got on the road. Got to the natatorium and coach M was there already. It had somewhat stopped raining, but the road was wet. Here we were hopping that from 5:30 to 8:00 the roads would dry up enough to make it safe. 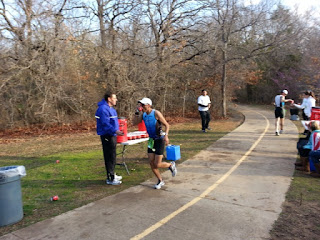 Got our transitions set and went in to the pool. It was in the 40s outside and wasn’t a good idea to just waste calories there trying to stay warm. At the pool we lined up, said our typical pre-race goodbyes and off we went. The swim for both of us went well, Puli did feel ok, he is good on those short distances, while Res felt a bit slow but looking at her results it was an improvement, which she took.

Off on the bike it was a bit technical, wet roads, 17 mph head winds and just overall cold… Too cold. But we managed to get it done and 12 miles went by fairly quick, saw a few accidents, which made us just be more self conscious of the road and to be careful.

The run was definitely the best for the two of us, we got to PR our 5k both Tri and individual times by a lot! That made us really happy.

In summary the race was a good one, definitely want to do it again, just wished it was a bit warmer, but its a good kick off of the season and can’t beat that is 5 min away from home :).

Vincentown DQ Tri Recap – 400m swim, 15m bike, 5k. I was out in Wave 3 w all the females. My nerves tried to get the best of me while waiting in not so clean pond water (the website had advertised the swim in fresh lake water). Not quite! Made me appreciate our Lake Grapevine swims!! Then I was off…tried to stay in the inner left close to the buoys which helped because mostly everyone was out in the front or in the outer right. Some pushing to get away but I kept my cool. My sighting was better than training days, which helped! T1 minor tech difficulties w my new helmet, which I had to replace during the week due to bike crash (story some other time). Bike course was great, felt confident, and averaged 18.9 miles. Well take that back, confident enough until a 75y/o man zoomed right by me on his Tri bike!! Thought of Laura and the pregnant lady story and giggled!! (team inside joke) Pedaled harder, but he was gone!! T2 was smooth and was off in my awesome Newtons! The run started off in the shade which felt good because it was already hot and humid. Got to h2o aid station and one of the residents was standing out in the street w hose which I stood under for 2 sec 🙂 continued to run and got to open corn field which was tough because it seemed forever as the sun was beating down!! Pushed harder and thought, can’t walk this at the end!! Total time: 1:32:56. 2nd in my AG, 17sec away from 1st-totally unexpected!! :)

A Blog of Running Exploits

Wherever you go, run with all your heart.

My fitness journey! The good, the bad, and the chocolate!

Listen to your inner self..it has all the answers..